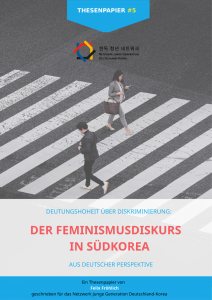 Feminism is a highly relevant issue in Korea, leading to major social conflicts among the younger generation. Due to mandatory military service and pressure to perform Korean men in their 20s see themselves as victims of reverse discrimination, and strongly reject measures for more gender equality. They associate the term ‘feminism’, which was coined by radical feminist groups in Korea, with an anti-male and extremist worldview. Especially in male-dominated Internet forums, feminist activists – but also uninvolved persons – become victims of smear campaigns. In politics, the topic of feminism is used as a wedge issue in an increasing attempt to mobilize anti-feminist young men to vote. In the presidential election campaign, the issue was very present and led to intra-party quarrels in the conservative People Power Party between candidate Yoon Suk-yeol and party leader Lee Jun-seok. In the ruling Minju Party, on the other hand, candidate Lee Jae-myung is trying to distance himself from the feminist but unpopular President Moon jae-in. Young women in particular therefore feel unrepresented in the current election campaign. Since the gender conflict is based on meritocratic competition for career opportunities, solutions should focus on offering young people better career prospects and reducing the pressure on young Koreans to perform.